Glamour and a Haul Pass

This is going to be a mashup of sorts…my first Haul Pass entry, but in a style that pays homage to one of my favorite artists I had growing up. First…what’s a Haul Pass? It’s basically something I’ve seen while out shopping but decided not to get (but will probably regret later.)

Years ago, my sister subscribed to Glamour magazine and I noticed illustrations every month that I loved! So when she was done with each issue I’d tear out all the pages that had illustrations on them and kept them in a folder. I loved the simples lines of each image, but that they still contained so much detail. The characters always looked like they were having so much fun! Most of the illustrations were in a section in the middle of each issue that was called “How To Do Anything Better Guide.” Durell Godfrey was the illustrator’s name. I enjoyed just looking at the illustrations, but also tried to mimic the style when sketching and drawing.

Fast forward to a few months ago. I decided to finally try to use Facebook a bit more and was looking up random people. I don’t know why, but Durell Godfrey’s name popped into my head so I typed it in the search and someone came up!  It’s such a unique name and figured it had to be the same person, but sent a message and asked. It was her! She was extremely friendly and nice. We exchanged a few messages and I learned more about her, and how she concentrates on photography now. Not only is she a great illustrator, but takes fantastic photos as well! Wow, I can’t tell you how excited I was! I had stared at all those pictures in that file folder for years and still have them to this day! 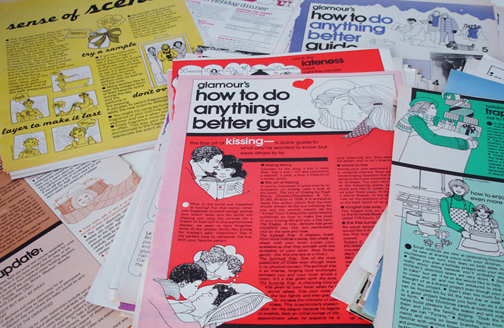 The same week I found Durell on Facebook, I was out shopping and a top caught my eye. Totally not my style and maybe even a bit 80’s disco influenced. It had silver metallic tubes that gathered the straps on the front and the material was very slinky. I tried it on and it looked okay, but again…not my style. So I passed. I also saw a *very* 80s looking striped knit dress. I held it up and chuckled a little then put it back.

Ding! I decided to do illos of the top and dress, but try to do it in Durell’s style to keep that 80s vibe going. 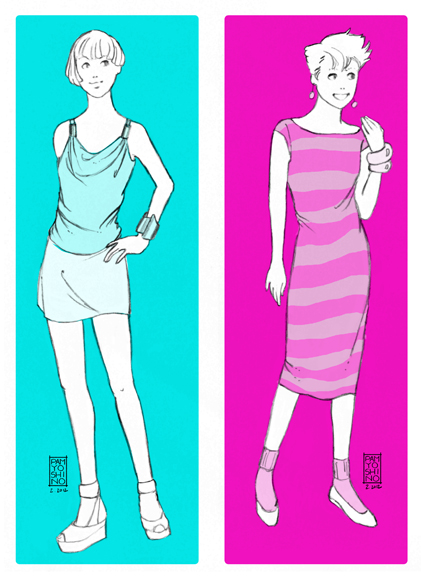 Oh, by the way, I’m still seeing those tops in the stores in tons of colors and made by different labels…but I still haven’t bought one…

4 Responses to Glamour and a Haul Pass