Woah, it’s been a long time since I’ve been able to post anything. I’ve been busy with a lot of freelance design work, but I’m still coming up with lots of new ideas! I’ve also started a lot of jewelry, but haven’t had the time to finish them completely! I was able to get the following two earring designs completed and managed to snap some quick shots as well: 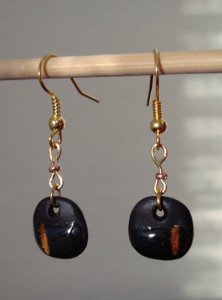 This pair are tiny black matte discs with clear resin layered over a small channel filled with metallic copper colored resin. I like the contrast of the matte and the ultra shiny resin. 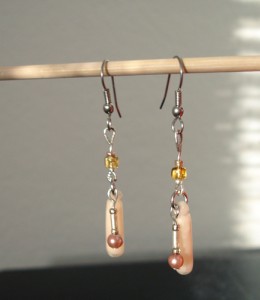 For this pair I tried out sculpting some translucent drop shapes with a touch of clear resin at the bottom. To embellish them a bit,  I added some metallic beads that dangle in front of the drop.

There is one other pair that are completed, but the photos didn’t do them justice, so once I get a good shot of them, I’ll post ’em.

Comments Off on Matte discs and translucent drops 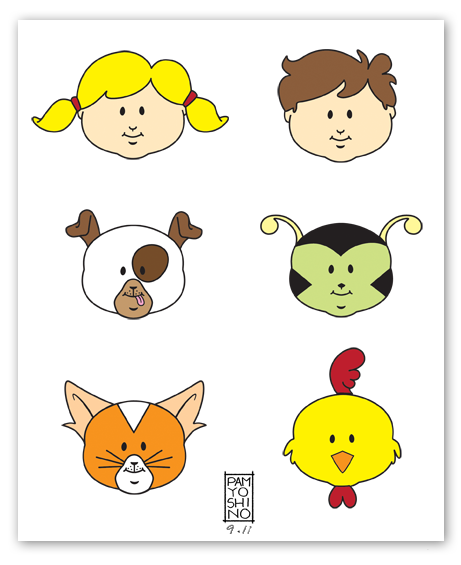 (mouse over image above to see sketched version)

I started sketching some faces, then thought of trying a little experiment–I wanted to use an identical head shape for all the different character faces, then add simple little touches here and there to make them all very different.

The girl, boy, dog and cat were all ideas that came to mind right away…but I have no idea how a bug and chicken popped into my head.

Gold chain and resin this time

Here is another pair of earrings I created using molded resin. This time I used a different mold and stuck to gold tones.

As with the previous silver earrings,  I used a little mineral powder, some chain, glass beads, microbeads and a charm. 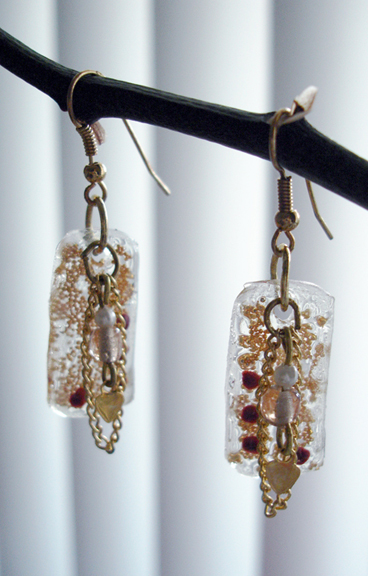 Comments Off on Gold chain and resin this time

Using one of the molds from my previous post, I made this pair of earrings: 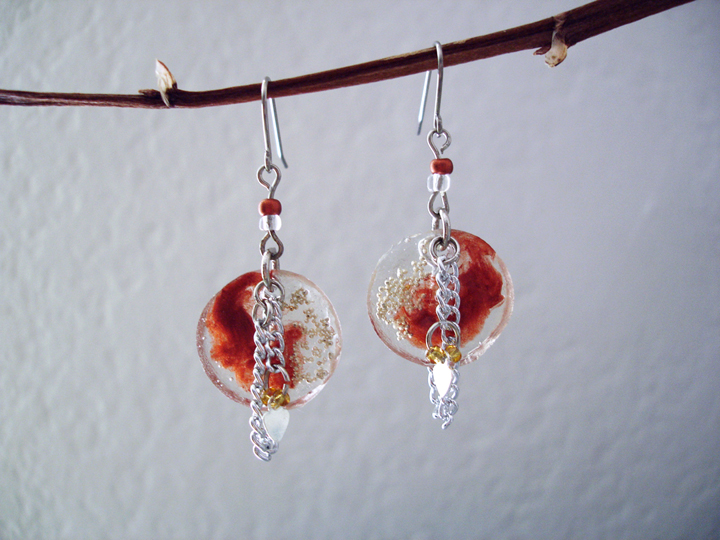 I used clear resin and added some gold micro beads and metallic mineral powder in layers in the resin. A thin silver chain is wrapped from back to front around the resin disc and a small silver charm and two small gold glass seed beads embellish the front.

The mineral powder looks really great when light hits it. 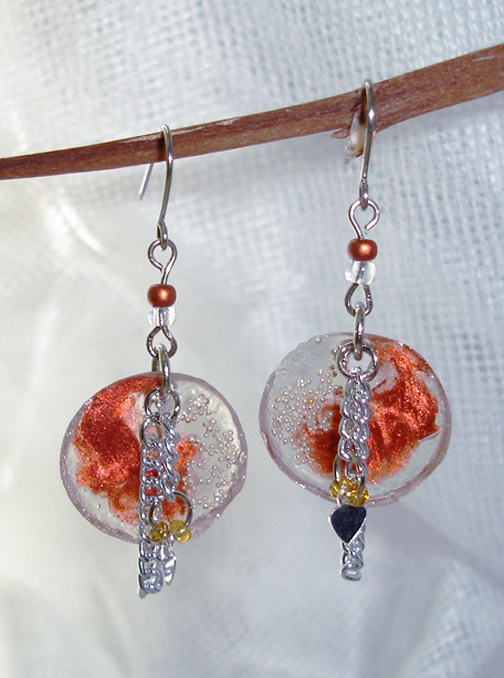 I love making silicon molds. You knead Part A and Part B together with your fingers until they are fully mixed (you can’t see any streaks of color) and then press around whatever you want to mold. While you’re kneading it, it feels like bubble gum. In this case, I molded some shapes I sculpted out of polymer clay. I’ll be using them for some jewelry components. Stay tuned…

Comments Off on Like chewing gum with your hands

Today on the Team Coco site, they featured four “new and noteworthy” pieces from their Coco MoCA gallery…and my bobblehead was one of the selections! 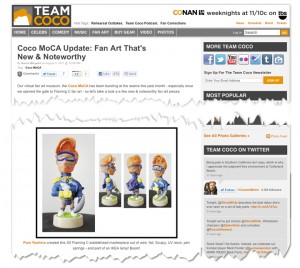 Comments Off on The Flaming C Bobblehead featured on Team Coco!

Filed under Sculpting, The Flaming C

Here’s something I make every year for New Year’s Day. 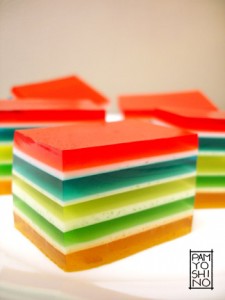 I got the recipe from a family friend who would invite us over every year on New Year’s Day for a gigantic spread. We’d stuff our faces with amazing food and watch football.

I was reminded of the recipe after discovering the justJENN blog. Her recipe is a little bit different (I do one extra layer of Jello) but it is basically the same. You can check out her version here.

Sure, it’s just plain ol’ Jello, but it looks really cool–especially when you hold them up to the light: 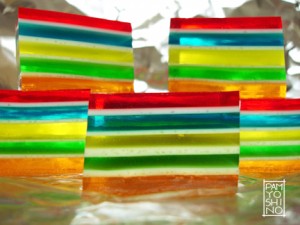 Comments Off on There’s Always Room For Jello

The day after I was laid off last month, my friend Anna sent me a link from the Team Coco site asking for viewer submissions of interpretations of the superhero, “The Flaming C” that Conan and Bruce Timm had cooked up a while back. She encouraged me to send something in.

I got really motivated and would work on the sculpt at night after spending my days networking with clients, coworkers and friends, updating my resumé, website and digital portfolio and looking at job ads and applying for graphic designer positions. Needless to say, the work didn’t proceed as quickly as I had hoped, but I finally finished it! 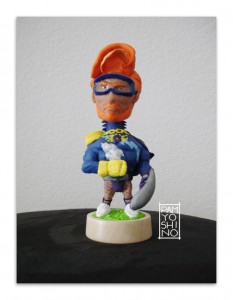 He’s sculpted out of polymer clay over a wire armature wrapped in foil to give it shape. I made the oven mitt smoke and goggles with UV resin. That UV resin is the coolest stuff. I picked it up at a Craft and Hobby Show last year. 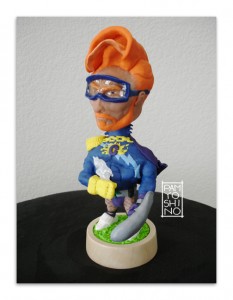 His base is a wall fitting from an IKEA lamp that I didn’t need. I’m glad I kept it! It was the perfect size! 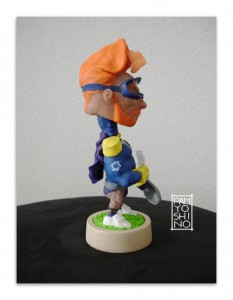 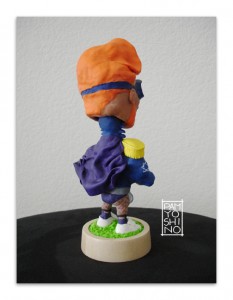 My friend Brian was really great and helped me put together a video of Flaming C in action!

I’ll post the process of making The Flaming C soon!

Filed under Sculpting, The Flaming C

Here are some freelance custom illosI did for a client. It’s kind of bittersweet to talk about them because although I’m happy with the way they turned out, it was not fun when the client decided not to pay me what she owed me after a lot of hard work. 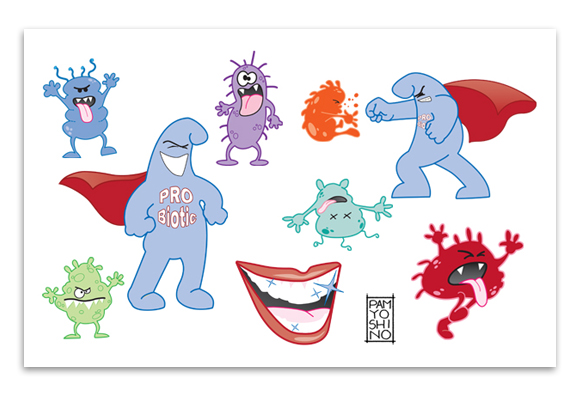 She had contacted me and asked if I was free to do a one-sided flyer for her. She asked for my hourly rate which I found odd since usually you give the client a rate for the entire project. But I gave her an hourly rate and she accepted it. I was then told that she also wanted several custom illustrations for the flyer and that it would be due in a week. I warned her that custom illustrations would take longer than simply laying out a flyer with a couple product photos and she said she understood.

So, I began to design the characters. It ended up being 9 different illos and a couple of changes to those original 9. The due date was changed twice from a week, to 5 days, then to 4 days! During that time, she had given me several revisions, but I managed to get it all done and to her on the 4th day. When she approved the layout, I sent her my invoice for payment…and heard nothing.

I emailed her a couple of times and finally received a letter from her in the mail with a check that was several hundred dollars short. The letter stated that she felt my invoice was too high and that the entire project of creating the 9 custom illos and 3 layout comps and the revisions, plus the rush deadline should have only taken me a total of 4 hours to complete! So she decided the amount she was willing to pay and wrote on the note portion on the check that if it is cashed, then it means that I have agreed that I have been paid in full.  Nice huh?

I had sent her a freelance agreement that pointed out my hourly rate and what the project required and she signed it, but decided to take it upon herself to override that and pay what she wanted to pay. Unbelievable. But taking her to small claims would probably cost more than what I was due in payment, and I think she realized this. So I cut my losses but still ended up with some illos that I’m proud to have created.

Comments Off on Germs

Welcome to my blog! That is me below…well, a digital illo that I did of myself. Humor me–that way I can make myself tall or skinny or long-legged or two-headed with a tail. 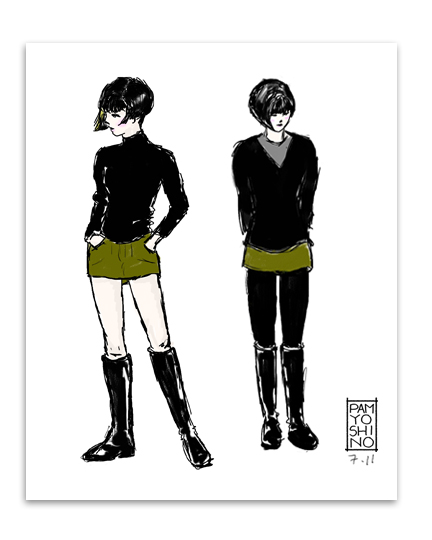 I originally did this sketch to show a friend some clothes I had bought and how I’d pair them with things I already owned. Sort of a ‘virtual haul’ kind of thing. In case you aren’t familiar–haul videos show people filming themselves showing different items they had just purchased at different stores. Google it. There are tons of those videos out there. It has made taste-makers out of a lot of teenagers.

Anyway, I figured it’d be a lot more fun to sketch cool items I’ve bought or received as gifts instead of going the traditional video or photo route.

In addition to illos or virtual hauls, I’ll be posting anything I happen to create and want to share. Hope you enjoy your visits here!

Comments Off on Hello!